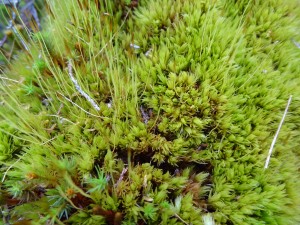 I’m delighted to announce that during a recent trip to explore Clara Bog, I discovered a small population of waved fork-moss (Dicranum undulatum), a plant up until then thought to be extinct in Ireland.  It was previously known from only four other raised bogs in Offaly.  Last seen in Ireland in 1960, its known sites have been seriously damaged by peat harvesting.  The sites and other raised bogs in Offaly that were in reasonable condition were searched fruitlessly for the plant over 2005-2009.  Because the only known populations could not be found again and because of the damage caused to raised bogs in the area due to turf cutting, waved fork-moss was judged to be extinct in Ireland in the recent book on the Rare and Threatened Bryophytes of Ireland. 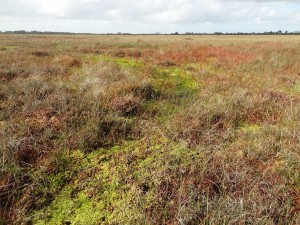 Elsewhere in Europe, waved fork-moss is a plant with a northern distribution found in bogs, poor fens and peatland pine forests.  Like Ireland, it is rare throughout most of Europe, except for Scandinavia, and is declining as a result of peat cutting, drainage and afforestation.  In Britain, it also mainly grows in intact raised bogs, where it is considered Vulnerable to extinction.  Waved fork-moss’s “reinstatement” in Ireland is very good news for nature conservation in Europe as well as Ireland.

The fact that waved fork-moss has been re-found gives us a second chance to conserve a species we thought was extinct.  Opportunities like this don’t come around very often.  The fact that it’s in Clara Bog makes the job of conservation a little easier, as the bog is a state-owned Nature Reserve and is managed by the National Parks and Wildlife Service.  It may be that the work blocking drains and rewetting the bog that has already happened there is responsible for the survival of waved-fork moss. 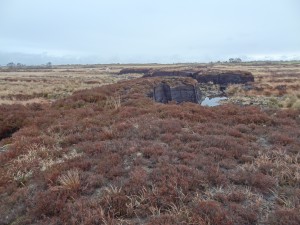 Remnant ribbon of raised bog cutaway from both sides

This little plant is a perfect example of the biodiversity that can be lost if we fail to conserve and restore our raised bogs.  Waved fork-moss and other bog specialists can only survive on wet, intact bogs, which are rapidly vanishing from the Irish landscape.  The National Raised Bog Special Areas of Conservation Management Plan and the National Peatlands Strategy, soon to be finalised, may give us a second chance to conserve our raised bog resource.  But they will only be up to the task if they are robust and properly implemented.  We won’t have many more chances.

Special thanks to Gordon Rothero of the British Bryological Society for confirming my identification.

UPDATE:  The Irish Times ran an article on this on 19 June, which you can see at this link.

UPDATE 2:  And the Tullamore Tribune ran a nice article with some pictures.  There was a nice closeup of the plant in the print version.