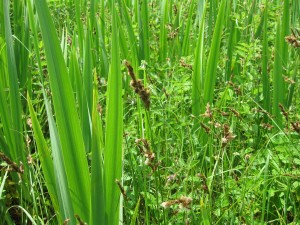 An interesting review paper is in press at the journal Ecological Engineering, entitled “Ecological consequences and restoration potential of abandoned wet grassland” (http://dx.doi.org/10.1016/j.ecoleng.2013.05.008).  The paper reviews the effects of agricultural abandonment on wet grasslands and assesses the potential for restoring species-rich wet grassland after abandonment.  Seventy-one (71) papers on wet grassland abandonment and restoration in continental Europe were reviewed.  No Irish (or British) research was reviewed because there apparently haven’t been any relevant studies done here.  So what, if anything, can we learn from the situation on the continent and how can it be applied here in Ireland? 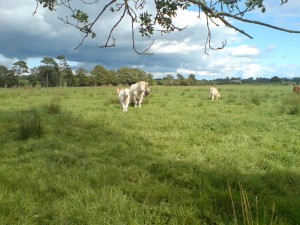 In Europe, abandonment of wet grasslands is a significant concern.  Although there are no comprehensive data for Ireland, abandonment of Molinia meadows was found to be the most significant threat to the conservation of that special type (Habitats Directive Annex I) of wet grassland.  Wet grasslands need regular, extensive rather than intensive management to maintain their conservation value.  Grazing or hay-cutting prevents the more competitive grasses from dominating and keeps trees and shrubs from invading.  In some situations, it may be a good thing to let a wet pasture revert to woodland.  But there are a suite of species that rely on wet, open habitats, including orchids, breeding waders and invertebrates, such as the endangered marsh fritillary butterfly.  Abandonment of marginally productive land in Europe is often the result of rural population declines, aging farmers, improved off-farm opportunities, and increased costs in farming marginal lands.  The situation in Ireland is exactly the same.  Intensification, or agricultural improvement in the form of drainage, fertilisation and weed control, is often the other side of the abandonment coin.  Some fields may be abandoned as a result of intensification in other fields when less land is needed to maintain the same levels of productivity. The review found that in many cases, the effects of wet grassland abandonment on biodiversity are apparent in three years.  Competitive grasses increase in height and cover and aboveground biomass and litter rapidly accumulate.  Tree invasion can happen quickly, or can be delayed for years if dense litter prevents seedling establishment.  Smaller species can be quickly eliminated as they lose the competition for light.  According to the studies reviewed, the losers frequently include legumes, orchids and fen or meadow species.  In general, small, stress-tolerant species decline during abandonment.  Natural nutrient enrichment may play a part as biomass formerly removed from a site is instead retained as litter, which eventually breaks down and becomes incorporated into the soil.  Although there aren’t any monitoring studies in Ireland that give us detailed data on the biodiversity effects of wet grassland abandonment, the same sorts of changes can be seen across the country.

The good news from the review is that abandoned wet grasslands seem like they can often be successfully restored to good conservation condition.  Depending on how long the grassland has been abandoned, the first steps are measures to reverse ecological succession: cutting trees and shrubs and reducing the abundance of dominant grasses, rushes and sedges.  Repeated mowing and removal of the cuttings is often the easiest and the most common method.  Cattle grazing was also found to be beneficial in most cases.  This would also have the benefit of exposing some bare soil by poaching to allow colonisation or regeneration from the seed bank of species that may have vanished from the site.  Where dense stands of reeds have invaded, a few studies have attempted more intensive restoration work, such as herbicide use or removal of vegetated turves.  In general, restoration can be successful in less than 10 years, where the site’s hydrology remains unchanged or is easily restored and where the soil fertility has not increased.  The review concludes that there are four key factors on which success will hinge: 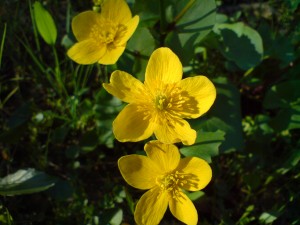 Abandonment of wet grasslands is a significant cause of biodiversity loss in Ireland as well as Europe.  Changing patterns of land-use are largely responsible.  If mechanisms can be found to reverse these changes, such as fit-for-purpose agri-environmental schemes, then it is possible to restore wet grasslands to good conservation status.