The Dún na Sí Amenity and Heritage Park in Moate, Co. Westmeath is having its official opening this Friday 20th September from 4.30pm.  The park is the final work of a dedicated bunch of local volunteers – the Midlands Amenity Park Association – who have been planning this for years.  The park has been developed on a bit of former common grazing now owned by Westmeath County Council.  It was known as the Cow Park, and it will always be called that by a lot of the locals, though “the Cow Park Park” doesn’t really have that certain ring.  You can find out more about the park and the opening on the park’s facebook page.

The amenity part of the park is in the middle of the site, bookended by the heritage parts.  One of the heritage bookends is the Dún na Sí Heritage Centre, operated by the local branch of Comhaltas Ceoltóirí Éireann.  In the Heritage Centre are replicas of megalithic monuments, traditional cottages, a hedge school, and traditional livestock, and céilís are regularly held there.  The other bookend is a bit of dampish grassland that looks rather unassuming these days, but is really the jewel in the park’s heritage crown.  It’s actually a turlough, a special type of transient wetland that is virtually unique to Ireland.  The Cow Park turlough is one of the few to be found east of the Shannon and is the only confirmed example in Westmeath. 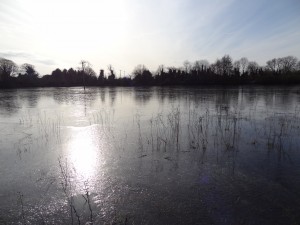 Turloughs are found in karst limestone landscapes, and their name is usually taken to be from the Irish tur lough meaning “dry lake”.  In the summertime they are grasslands, usually grazed by cattle.  In some turloughs, there is a permanent pond or wetland in the middle.  In the wintertime, when the water table rises, turloughs turn into lakes.  They fill quickly – over a matter of hours or days – via hollow, water-filled galleries in the bedrock that open out into one or more discrete swallow-holes.  These can be hard to spot when the turlough is dry, and it’s unclear where all the Cow Park turlough’s swallow-holes are.

This specific hydrogeological system with its strong seasonality is virtually unique to Ireland (there are reports of a turlough in Wales and some karstic wetlands in Slovenia that are at least very turlough-like).  Because of their unusual environmental conditions, they support very special ecosystems rich in plants and invertebrates.  The importance of turloughs to European biodiversity is such that they are recognised as a priority habitat in the EU Habitats Directive.  This means that many turloughs are officially designated as Special Areas of Conservation, though not the Cow Park (at least yet).

It’s confession time here.  My wife is from Moate and I spend a lot of time there.  I used to go to the Cow Park years ago when I first moved to Ireland, armed with my (then) new copy of Webb’s An Irish Flora, trying to learn all the (to me) foreign plants.  I still have a lot of the plants I collected then pressed in a binder (Veronica scutellata, marsh speedwell, is the prettiest of them).  Once I got to know most of the plants in the Cow Park, I moved on to other pastures, and I never returned there for a serious look at the place.  I knew it flooded in the winter, but so did a lot of places.  I never realised it was a turlough.  In my defence, though, I’m in good company.  There have been a lot of surveys of the Cow Park carried out by competent botanists before and after me.  (I’m not naming names here.  You know who you are.)  It wasn’t until Faith Wilson surveyed the site in December 2011 for an Appropriate Assessment of the amenity park project that she realised that the vanishing lake is really a turlough. 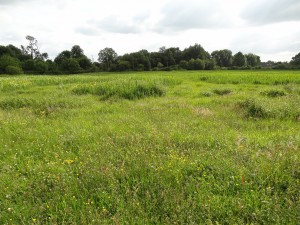 The Cow Park turlough isn’t very big, but it packs a lot in.  In the centre is an area of rich fen dominated by bog bean (Menyanthes trifoliata), stoneworts (Chara vulgaris) and pondweeds (Potamogeton species).  This is usually permanently wet, but with the wonderful summer we’ve had, it’s completely dry now.  All the calcium carbonate that has precipitated out as the water evaporated, like limescale in a kettle, gives the vegetation a bleached look.  Hopefully it will recover nicely when the autumn rains raise the water table!  Around the central fen is a zone dominated by sedges (Carex nigra, C. disticha, C. hirta and others) with water horsetail (Equisetum fluviatile), lesser spearwort (Ranunculus flammula), water mint (Mentha aquatica) and others.  Above this zone are stands of yellow flag (Iris pseudacorus) and species-rich wet grassland.  A line of hawthorns (Crataegus monogyna) marks the upper water level.  A total of 138 plant species, including stoneworts, mosses and liverworts, have been recorded from the Dún na Sí Amenity and Heritage Park site over different surveys, including my own.

The development of the park adjacent to such a valuable and sensitive ecosystem has meant a lot of challenges and compromises.  I have been advising the Midlands Amenity Park Association strike this balance in creating a local recreational amenity while at the same time safeguarding and taking advantage of the natural heritage.  For example, it was originally planned to excavate a permanent duck pond where it floods in winter.  The discovery of the turlough put an end to that idea!  A smaller pond was decided on instead, and some balancing between ecology and access was needed to determine where to place it.  Mark Boyle of Murray & Associates has been very flexible with the landscape and planting plans, and I’ve been helping advise on what species are suitable to plant and where.  Now that the turlough is no longer grazed by horses as it used to be, a long term management plan is being drawn up to maintain the biodiversity of the site.

Please do come along on Friday if you’re in the area, and see the new Dún na Sí Amenity and Heritage Park with its beautiful turlough yourself.  I’ll be there to help show people around and to explain what a fantastic piece of natural heritage they have on their doorstep.